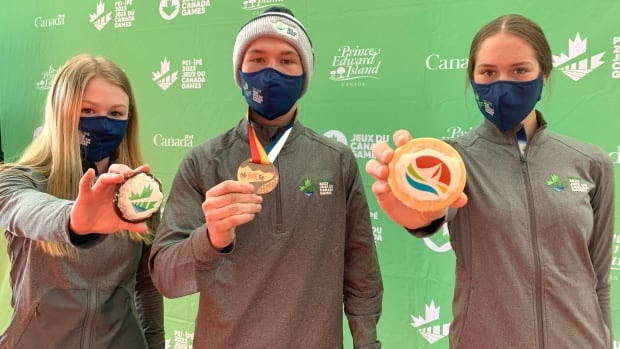 The host society for the 2023 Canada Winter Games being planned for Prince Edward Island has its first big sponsor: Atlantic Lottery.

The society made the announcement at a news conference Thursday, along with what it called a "major rebrand" including a new logo.

"These Games will be truly transformative," said Brian McFeely, the 2023 Canada Games board co-chair.

The Games will be the biggest event in P.E.I.'s history, organizers said. More than 5,000 volunteers are needed, and more than 3,600 athletes and team officials are expected.

Organizers also launched a new website where people can sign up to volunteer, learn more about sponsorship, and shop for Canada Games merchandise. They also released a promotional video narrated by award-winning P.E.I. singer-songwriter Lennie Gallant.

The new logo combines the idea of a spark and a maple leaf, organizers said, representing the vision to "spark greatness," McFeely said. The primary colours will be blue and green, reflecting P.E.I.'s natural beauty.

The Games are still actively seeking sponsors for the 20 sports and 150 events.

Premier Dennis King greeted the news conference in French, English and Mi'kmaw, and predicted that the games would be "unfolding with the long and windy road of the pandemic clearly in our rearview mirror."

"We will throw a party that's never been seen before on P.E.I.," King added. "We will see the next generation of great athletes join and participate here, and we will see the legacy of the spirit of the Canada Games stay with us long past."