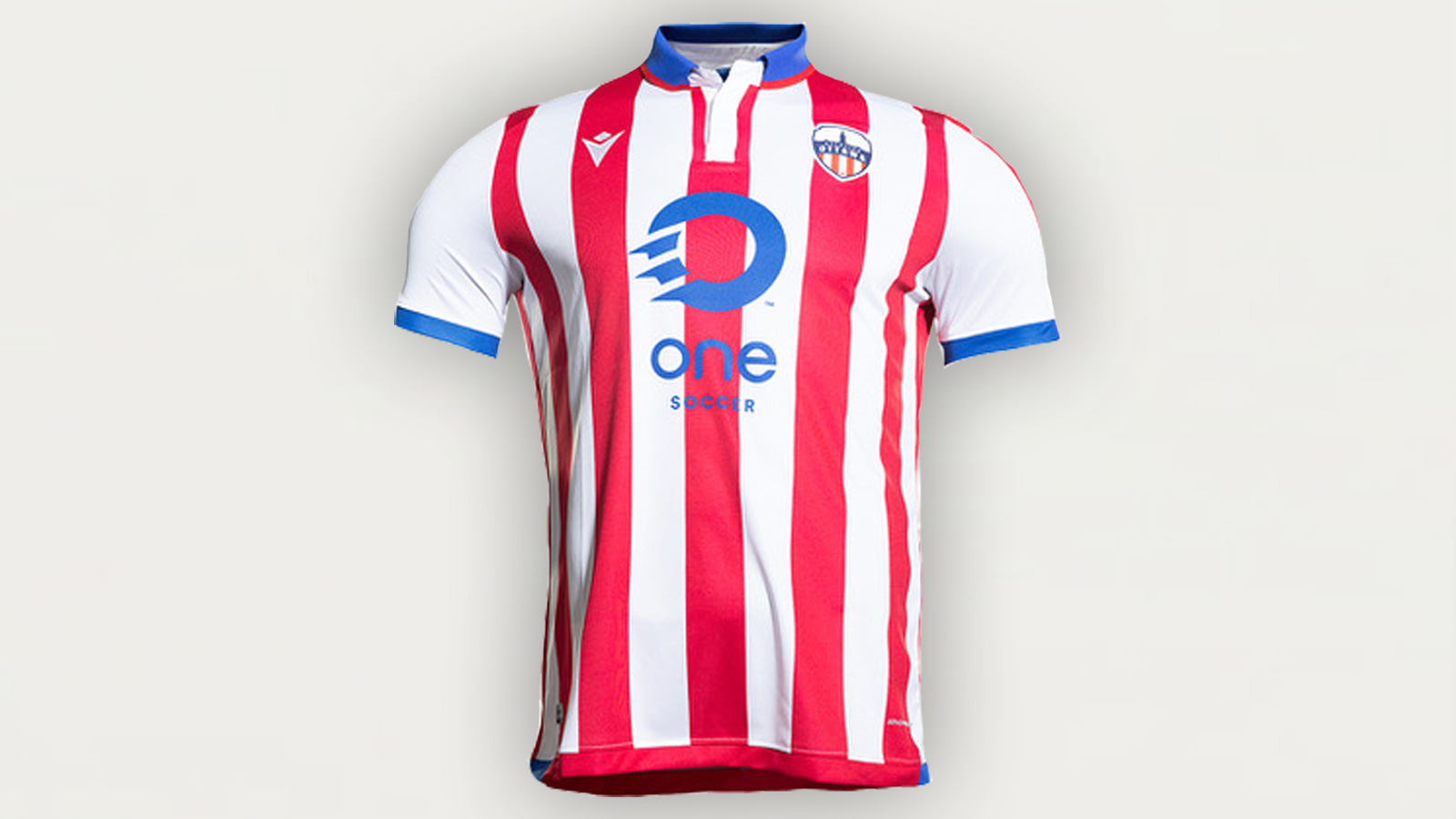 At long last, the wait is over for Atlético Ottawa fans: the Canadian Premier League’s newest club unveiled its first-ever home kit on Thursday evening via a live Facebook event with fans that was also streamed on OneSoccer’s YouTube channel.

The Macron uniform’s design for Atlético Ottawa’s inaugural season is reflective of parent organization Club Atlético de Madrid’s iconic red-and-white striped kit, which they’ve been using since 1911, but it also incorporates unique elements for the new CPL team and the Ottawa-Gatineau region.

Just like Atlético Madrid, Ottawa will play in the striped shirt and blue shorts, with several Rideau Blue details at the jersey’s collar and sleeves, as well as a OneSoccer kit sponsorship.
Like all Macron CPL kits, the Atlético Ottawa jersey has the league’s motto, “We Are Many, We Are One,” printed on the back, as well as the words “For Canadians, By Canadians” printed on the inside of the collar.

Atlético Ottawa will also be the only CPL club whose 2020 home kit does not feature white shorts and socks.

The back of the jersey features a large red Maple Leaf, which will be visible under the player numbers. It’s a nod to the club’s Canadian identity, as well as Atlético Madrid’s foray into the world of Canadian soccer. The blue detailing is said to be inspired by Ottawa’s iconic Rideau Canal.

“Our inaugural kits demonstrate the club’s on-field identity that is all about courage, never giving up, and playing fiercely committed football for one another while off the field hard work, humility and family focus are core values,” Atlético Ottawa CEO Fernando López said.
The new threads are popular among the players as well, it seems, with veteran Francisco Acuña telling CanPL.ca through a translator that he was impressed with the home uniform.

“When I saw it I fell in love right away, and every time I would see it again, I liked it even more. I’d maybe have a bit of the audacity to say it’s one of the nicest jerseys I’ll be wearing compared to the other jerseys I’ve worn in my career.”
The Mexican midfielder, who has worn the jerseys of such clubs as Tigres UANL and Puebla in his home country, also assured CanPL.ca that it’s even better in person than it is in pictures.

Along with the kit unveiling event, Atlético Ottawa revealed the squad numbers its players will wear in 2020, so that fans can purchase customized shirts. Among the announced numbers are Acuña taking number 8, Ben Fisk wearing number 10, Malyk Hamilton with 2, and Antoine Coupland with 11.

“Now more than ever, Ottawa is the city that unifies our country,” Atlético Ottawa president Jeff Hunt stated.

“With the arrival of Atlético in the capital and with an aim of inspiring and mobilizing the local soccer community, we are beyond excited and proud to launch these incredible jerseys. I am looking forward to seeing the red and white stripes all over our city.”

The new kit is immediately available for purchase on Atlético Ottawa’s official store website, with custom name and number printing also available. The home kits for the CPL’s seven other clubs, which were revealed on February 27, can be found alongside the Atlético Ottawa jersey at shop.canpl.ca.

Article by Charlie O'Connor-Clarke as posted on Canadian Premier League.