Although Big Beer Still Dominates Sports Sponsorships, Craft Brewers are Getting in on the Action 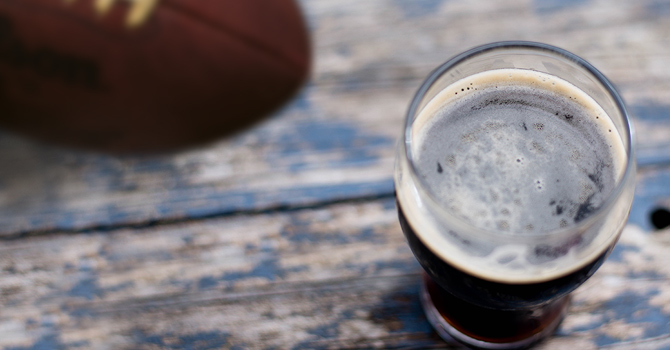 For decades, professional sports sponsorships were the domain of the biggest beer companies, and in 2020, that’s mostly still the case. However, craft brewers have been making inroads.

Anheuser-Busch InBev remains the king of sports sponsorships, as the official beer sponsor of the four major pro sports leagues — the NFL, NBA, NHL and MLB.

In fact, the world’s largest beer manufacturer’s marketing dollars have been so prolific that Sports Business Journal named A-B the “Sponsor of the Decade.” As the official beer sponsor of the Super Bowl, A-B’s heft will be on display next month during breaks in the onfield action between the Kansas City Chiefs and the San Francisco 49ers at Hard Rock Stadium in Miami.

Super Bowl LIV marks A-B’s 40th year as an official sponsor of the big game. In that time, A-B has created 125 ads, which accounts for 10% of all Super Bowl ads, according to the company.

This year, A-B will run four 60-second commercials for its Budweiser, Bud Light, Michelob Ultra and Michelob Ultra Pure Gold brands. Those spots come at a premium. This year, Fox is charging at least $5 million for 30 seconds of airtime, with some spots going for $5.6 million, according to The Wall Street Journal. All 77 commercial slots sold out in November.

Though A-B has exclusivity rights over nationally televised ads during the big game, Molson Coors Beverage Company will run 30-second spots in local markets during the game for Saint Archer Gold, its low-calorie, low-carb challenger to Michelob Ultra.

A-B’s exclusivity over the Super Bowl extends beyond televisions. Inside Hard Rock Stadium, A-B has exercised exclusivity rights over beer sales during the game, a company spokesperson confirmed to Brewbound. As such, fans at the big game won’t be able to buy craft beer brands normally sold at the stadium.

Although A-B has dominated Super Bowl Sunday, craft brewers of various sizes have begun striking their own sports partnerships and moving into ballparks, stadiums and arenas.

These partnerships have manifested themselves as designations as teams’ “official craft beer,” branded spaces within venues or specialty beers made in collaboration with teams. Among the first craft brewers to cut a deal was Kansas City’s Boulevard Brewing Company in 2017, striking one of the first “official craft beer” deals with the Kansas City Royals.
In late 2017, the Boston Beer Company announced an 8-year-deal to make Samuel Adams the official beer of the Boston Red Sox, marking the first time a Brewers Association-defined craft brewer struck a partnership with a Major League Baseball franchise as its sole beer sponsor.

The deal literally changed the landscape of iconic Fenway Park, as an outfield Budweiser sign in right field was replaced by a Samuel Adams sign and a roof deck bar with a seating area rechristened the Sam Deck, where Boston Beer products have near exclusivity over the taps.

Within a year of the deal, the Red Sox won the 2018 World Series. Meanwhile, Sam ‘76 is now the top-selling beer at Fenway Park.

With a successful large-scale sponsorship under its belt, Boston Beer began striking sports partnerships for its fast-growing Truly Hard Seltzer brand. Last September, the company announced a deal to make Truly the “official U.S. hard seltzer” of the NHL. That deal marked a departure for Truly, which leaned on Instagram lifestyle influencers for its 2016 launch.

The pivot was intentional, Lysyj said, as hard seltzer has become more mainstream and gender neutral and less seasonal.

“The curve keeps smoothing out,” she said. “The reason the NHL is a great partnership for us is it bookends the summer months. That just on its own is one of the reasons we picked them.”

Through its NHL partnership, Truly was the official sponsor of the league’s Winter Classic PreGame party in Dallas.
Hockey was a popular target for beer partnerships in 2019. Both A-B and Molson Coors made deals with the NHL. Bud Light is the league’s official beer in the U.S., and both Budweiser and Molson Canadian are official beers in Canada. This non-exclusive sponsorship model is unique to the NHL.

Last month, D.G. Yuengling & Sons announced a multi-year partnership with the NHL’s New Jersey Devils and the Prudential Center in Newark, New Jersey, 125 miles east of the company’s headquarters in Pottsville, Pennsylvania. The deal grants Yuengling a 13,000 sq. ft. branded bar and dining space inside the arena, a first for the craft brewer. Yuengling also has signage throughout the arena and rights to use the team’s logo in its marketing efforts.

Yuengling also made a multi-year deal in September to become the “official domestic beer” of the University of Central Florida Knights. That deal came a year after Yuengling acquired the naming rights to the former “Sun Dome” at the University of South Florida.

Covington, Kentucky-based Braxton Brewing Company has also been a prolific sponsor of sports, especially in Ohio and Indiana. Braxton’s Vive Hard Seltzer is the official hard seltzer of the NFL’s Cincinnati Bengals, the NHL’s Columbus Blue Jackets, the NBA’s Indiana Pacers and MLS’s FC Cincinnati. For the Bengals, Blue Jackets and Pacers partnerships, Vive has created special variety packs for each team’s local market with team logos on the outer cartons.

Braxton marketing manager Mitch Barnhill told Brewbound that the branded packs communicate to retail partners that the company is committed to investing in marketing behind the Vive brand, which launched in early 2019.

Through Vive’s sponsorships, Braxton has gained placements in each team’s venue, something that would have been out of reach without the deals. In 2019, Vive sold 50,000 case equivalents, according to a company spokesperson.

“It’s created a nice halo effect with the beer brand,” Barnhill added. “Because Vive is so new, we’re able to start these partnerships and it’s driving beer growth as well because we’re able to get into places like Bankers Life Fieldhouse that we normally wouldn’t get into without some kind of sponsorship.”

Another boon for Vive, which Samuel Adams benefits from with the Red Sox, is a connection in consumers’ minds with their local sports teams.

“We’re the only local hard seltzer option that you can find packaged on the shelves,” Barnhill added. “We’re going up against the Trulys and the White Claws of the world, so when we partner with these local teams and — Indianapolis isn’t where we’re from — but it’s just really, really positive to see the support around the community.”

In Miami, Craft Brew Alliance-owned Wynwood Brewing struck a deal in December to become the official craft beer of the Miami Heat, which netted the brewery four branded beer carts and other package placements at AmericanAirlines Arena.

“We quickly realized that a lot of our consumers and their fans are the same people, so really for us it was just getting in front of the right fans and being part of something great,” VP of sales and marketing Ian Salzberg told Brewbound.

This isn’t the first time Wynwood has dabbled with the Heat. Former Heat star Chris Bosh occasionally stopped by the brewery to brew with the staff.

In the past, Wynwood brewed White Hot Wheat as a nod to the team. However, the beers available at AmericanAirlines Arena this time around include La Rubia Blonde Ale, Laces IPA and Pop’s Porter, with the potential for rotating draft lines at the branded beer carts.

The sponsorship includes advertising in the arena and access to team assets, which Salzberg said will adorn point-of-sale items. Wynwood will also host watch parties in its taproom for away games.

The goal of the Heat partnership is to drive awareness for the Wynwood brand in its hometown.

“Craft beer’s still not in Miami where it is in other parts of the country,” Salzberg said. “People are still discovering local beer and craft beer and hopefully this partnership will help us reach new people.”

In Texas, A-B-owned Karbach Brewing brewed Crawford Bock for the MLB’s Houston Astros and donated a portion of sales to the Astros Foundation. Seattle-based Elysian Brewing brews The Noise, a pale ale, for the NFL’s Seattle Seahawks.

A-B’s beyond beer offerings have also benefited from the partnerships, according to a company spokesperson. A-B’s Bon & Viv Spiked Seltzer is the NFL’s official hard seltzer, and Babe is its official wine.

CANarchy-owned Cigar City Brewing became the official craft beer partner of the NHL’s Tampa Bay Lightning at the start of the 2019-2020 season and opened a new taproom adjacent to Amalie Arena.

The relationship between the brewery and the team was years in the making, Cigar City chief operating officer Justin Clark told Brewbound. The Lightning courted Cigar City for a partnership a few years after the brewery opened, but Cigar City always declined due to capacity constraints.

“We were really scared of the exposure at first because we weren’t meeting demand,” Clark said. “We always hoped we’d be making enough beer and be able to take advantage of that opportunity.

The arena-adjacent taproom is in Tampa’s downtown district, giving the brand a visible presence in a busy area about five miles from Cigar City’s brewery.

“The arena’s so centrally located and it’s so accessible to the everyday consumer,” Senior marketing manager Maria Grieshaber said. “It’s also really driven by consumers, because if consumers weren’t going in there and asking for craft, there’d be no motivation to put it in there. So being able to connect those experiences is key.”

“It wouldn’t be possible without their buy in,” he said.

In addition to the taproom and product placements, the brewery’s annual Hunahpu’s Day festival will take place inside the arena in March, a first in its 11-year history.

As part of the deal, Cigar City’s logo will be displayed on advertisements during games.

“We have more digital assets than I would have ever thought possible for a craft brand, which is significant, because when it’s up there, people don’t differentiate in terms of sponsorship level,” Grieshaber said. “They see us aligned with every beer there, and that to me is really important. We’re not taking a step back as craft.”

Article by Jessica Infante as posted on Brewbound.